Cookie preferences
This website uses cookies, which are necessary for the technical operation of the website and are always set. Other cookies, which increase the usability of this website, serve for direct advertising or simplify interaction with other websites and social networks, will only be used with your consent.
Configuration
Technically required
These cookies are necessary for the basic functions of the shop.
Allow all cookies
Amazon Pay
CSRF token
Cookie preferences
Currency change
Customer recognition
Customer-specific caching
Decline all cookies
Individual prices
Language detector
Selected shop
Session
Comfort functions
These cookies are used to make the shopping experience even more appealing, for example for the recognition of the visitor.
Note
Statistics & Tracking
Affiliate program
Track device being used 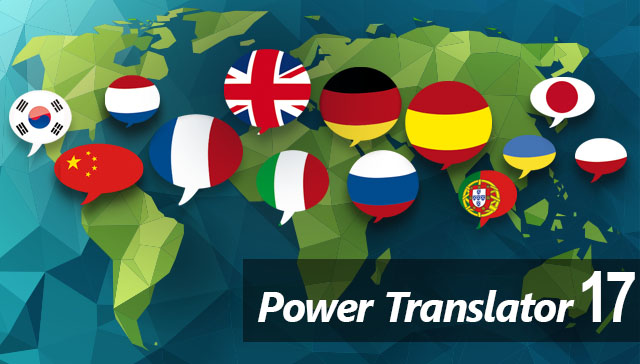 Mutual understanding removes obstacles. The proven Power Translator sets completely new accents thanks to the revised user interface and with regard to operation and input options so that this already begins with the operation of a translation software.

The user-friendly translation interface remains familiar, with desktop-wide and mouse fast word and text translation via mouse pointer, translation of Internet pages on-the-fly in the browser and, thanks to the connection to the language modules of Windows 7, 8 and 10, additional speech input/output via dictation and reading aloud. In addition, there is now also the fast and easy translation directly in social networks. Users who need translations quickly and easily between the most important world languages, whether from Word documents, PDF files, Internet pages, desktop content or even images, are ideally equipped for translations with the large language range of 13 languages.

1WorldChat.com offers users multilingual chat rooms in 13 languages to communicate with people from all over the world. All foreign-language chats on 1WorldChat.com are automatically translated into the language selected by the user for the 1WorldChat.com conference. The user also has the option of creating private conference rooms to which only people who have been invited have access. With the Power Translator 17 World Edition, language barriers no longer hold up the daily work on the desktop.

Messages from Facebook, Skype and/or Twitter are conveniently translated into ClipTrans. In addition, it is possible to use the popular Google Brower, "Google Chrome" to surf the net and have foreign pages translated.

Application examples & advantages
The language range and the integration into the desktop interface are the special strengths of the Power Translator 17 World Edition. This makes access to translations from different applications and for different document types particularly fast and easy. The fast change between the translation directions and the automatic recognition of the source language makes the use, e.g. in the office area, especially for beginners and occasional users unproblematic, simple and fast.

Desktop integration: Microsoft Office and Outlook etc.
Plug-ins for Microsoft Word, Excel, PowerPoint (also Microsoft Office 2010) and Outlook make everyday office life easier. Internet Explorer and Firefox can be used with Power Translator 17 World Edition to translate Internet pages immediately - with a simple setting, Internet pages are now displayed in the language of the user's choice. Translating desktop windows or directly from the clipboard and translating text passages or individual words - no matter where they are displayed on the desktop - without a click just with the mouse pointer: The translation with Power Translator 17 World Edition is independent of the program you are currently working with, the translation engine is conveniently available at any time. In addition, instant messaging with the Power Translator is also possible while the input is still being translated.

Batch translation
The fast translation engine also proves its advantages with batch translations: DOC, RTF, text, PDF, WordPerfect, MS Works and HTML/XML files can even be edited in the background in folders, and translations are stored in appropriately named files (some in text format).

Read aloud function and speech recognition
The connection to the speech modules integrated in Windows XP, Vista, 7 and 8 (Speech SDK) enables input by dictation and direct reading aloud of the translation. (The languages supported for speech recognition (dictation) and speech synthesis (reading aloud) depend on the installed Microsoft Speech SDK and can therefore vary.)

Conclusion: With the Power Translator 17 World Edition, language barriers no longer stop the daily work on the desktop. And should additional languages be required, the language range can even be extended by an optional subscription. Despite all its advantages, it should not be forgotten that machine translation cannot yet completely replace human translation.

How and when do I get my purchased product?
Digital products, product keys and access to the download center will be made available to you by email immediately after your purchase - unless a data medium has been ordered.
What payment options are available to me?
PayPal, Amazon Pay, Instant bank transfer, Credit card, Apple Pay, Prepayment, Purchase on invoice
What guarantees do I have at Blitzhandel24?
Blitzhandel24 is an EHI, TrustedShops and CHIP certified online brand shop. Blitzhandel24 also offers its customers permanent support, as well as support for the purchased product. If a product has not been used / redeemed, our customers can benefit from the money-back guarantee.
Related links to "Avanquest Power Translator 17 World Edition, Vollversion, [Download]"
Trusted Shops Bewertungen
Close menu
Viewed
Trusted Shops Reviews Toolkit: 1.1.2
This website uses cookies, which are necessary for the technical operation of the website and are always set. Other cookies, which increase the usability of this website, serve for direct advertising or simplify interaction with other websites and social networks, will only be used with your consent. More information
Decline Accept all Configure