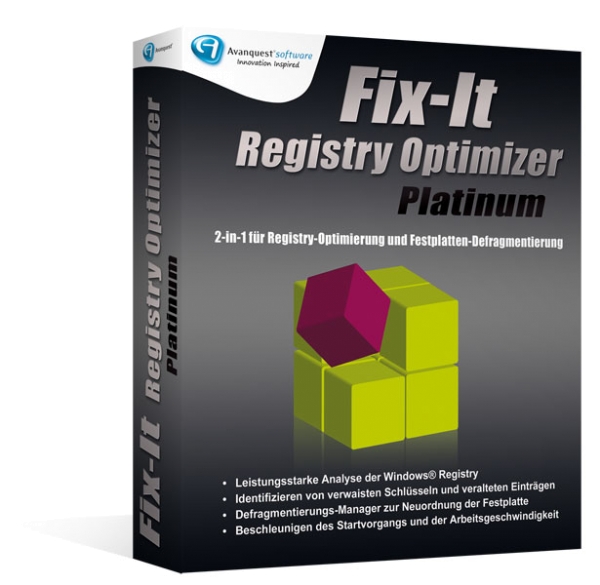 Does your computer hang up occasionally or run extremely slowly?

Stay calm! You don't need to invest a lot of money in more up-to-date hardware or even a new computer. These problems are often caused by the Windows® registry database.

If you clean and optimize the registry regularly, your PC will run like new in the future!

Settings and options for Microsoft Windows® are stored in the Windows registry. In the course of time the size of the registry increases more and more and a lot of invalid and superfluous data accumulates. Windows registry problems are often the cause of Windows crashes, limited performance, and error messages.

Fix-It Registry Optimizer saves you from time-consuming and tedious troubleshooting by quickly checking the registry for errors and optimization possibilities. Fix-It Registry Optimizer is simple, user-friendly and safe to use. Within two minutes or less, a complete list of all registry errors and optimization options for your PC is displayed and can be implemented immediately if required.

In order to make it easier for beginners to use O&O Defrag 16 Professional, the user interface has been revised and simplified. Stored file fragments are summarized even better than ever before because the algorithms responsible for them have been optimized. Also the defragmentation of locked files is supported even better by the new version and the optimization for Solid State Drives (SSDs) was extended, now further manufacturers are supported.

For each drive, the system displays which user action led to which optimization success. For this purpose, the current degree of fragmentation after completion of the action is shown first; for a better comparison, the "before" status is shown.

In a few minutes, Fix-It Registry Optimizer thoroughly checks the registry for errors and finds invalid keys, outdated data, and other potential problems that can lead to PC performance degradation or Windows freezing. The scan results are displayed in such a way that they are easy to understand, and you have the option of correcting the problems found with a single click.

Optimize your computer's settings to ensure it always performs at its best. With Fix-It Registry Optimizer, you can customize the settings yourself or adopt the program's recommendations to optimize performance and speed.

We are proud of the user-friendliness of our products. The start screen contains a large "Start Check" button and on the screen with the results you will find a large "Fix Error" button. With Fix-it Registry Optimizer, both advanced and inexperienced users are able to able to increase the performance and speed of their PC.
With the integrated scheduler you define a date for the registry check and leave the execution to the program!
From now on, there's no reason for slow-running computers anymore. Simply set up the integrated scheduler to automatically run a check at startup or program a daily, weekly or monthly check.

With Fix-It Registry Optimizer superfluous registry entries can be removed safely and easily. For security, backups and system restore points can also be created from the Backup menu.

Adapt inspection to your own requirements

Maybe you want to exclude certain keys in the registry from the check? No problem. No problem. Fix-It Registry Optimizer makes it easy to customize registry scanning by including or excluding specific files from future scans.

With Fix-It Registry Optimizer you can ensure a clean registry and optimized settings in just a few minutes. Do a free registry check now and look forward to a faster and more efficient PC.

How and when do I get my purchased product?
Digital products, product keys and access to the download center will be made available to you by email immediately after your purchase - unless a data medium has been ordered.
What payment options are available to me?
PayPal, Amazon Pay, Instant bank transfer, Credit card, Apple Pay, Prepayment, Purchase on invoice
What guarantees do I have at Blitzhandel24?
Blitzhandel24 is an EHI, TrustedShops and CHIP certified online brand shop. Blitzhandel24 also offers its customers permanent support, as well as support for the purchased product. If a product has not been used / redeemed, our customers can benefit from the money-back guarantee.
Related links to "Avanquest Fix-It Registry Optimizer Platinum"
Evaluations 1
Read, write and discuss reviews... more
Close menu
Customer evaluation for "Avanquest Fix-It Registry Optimizer Platinum"
From: A. Kast On: 2 Nov 2020

Bestellt.Bezahlt. In kurzer Zeit Produkt-Key bekommen. Was will man mehr.